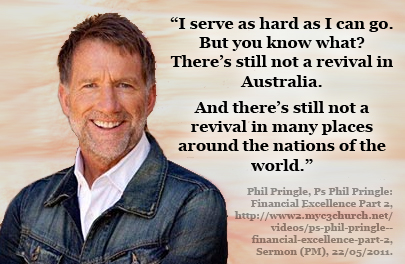 Phil Pringle has made many false prophecies in regards to ‘revivals’ which we have recorded from 1998 to 2011. We will be looking at a number of these prophecies as time progresses.

So this is an important claim that Phil Pringle made on the 22nd of May, 2011 in his Sunday night sermon ‘Financial Excellence’.

“I’ve a corporate responsibility to the entire kingdom of God. To the whole body of Christ. Now look!

I fast. I pray. Everyday in my life, I’m seeking God for a revival. I preach. I worship. I serve as hard as I can go. But you know what? There’s still not a revival in Australia. And there’s still not a revival in many places around the nation and around the nations of the world.” – Phil Pringle, Ps Phil Pringle: Financial Excellence Part 2, http://www2.myc3church.net/videos/ps-phil-pringle-financial-excellence-part-2, Sermon (PM), 22/05/2011.

Up until now, it seems that all of Pringle’s major prophecies have been about predicting revival. And yet here he clearly states that, “There’s still not a revival in Australia. And there’s still not a revival in many places around the nation and around the nations of the world.” So what does that say about the truth of his prophecies before this statement?

For example, here is a prophecy we have of Pringle ‘prophesying’ in 1998.

False Prophecy From Pringle in 1998

It is also highly possible that the prophecy Pringle spoke about North Korea in 2007-8, is false.

This also means that Phil Pringle’s prophecy prior to Presence Conference 2011 (2 months before the above quote), false.

Another False Prophecy By Pringle Alongside A Deceitful Sermon