We know Pringle has been influenced by the dangerous teachings of the ‘New Aposolic Reformation’ (NAR) leader, Peter Wagner. This is evident in Pringle’s books.

Thanks to Pringle, he has confirmed to us his close association with Wagner. It’s important to know that Wagner is an old friend of Pringle’s.

Great catch up with old friend & amazing man of God, father in the faith, Peter Wagner, this morning! 83 & still firing! 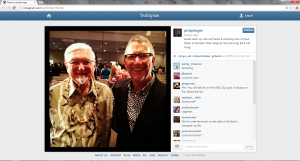 Before people think we are being unfair labeling a cute old man as dangerous, it is important to understand that Wagner was exposed as an international fraud when he laid hands on Todd Bentley at Lakeland Florida:

California pastors Ché Ahn and Bill Johnson, along with Canadian pastor John Arnott, laid hands on the 32-year-old Bentley while Peter Wagner, leader of the International Coalition of Apostles, read a statement about the need for apostolic alignment.
[…]

“I also decree that a new supernatural strength will flow through this ministry. A new life force will penetrate this move of God. Government will be established to set things in their proper order. God will pour out a higher level of discernment to distinguish truth from error. New relationships will surface to open the gates to the future.”

From what we understand, false apostles and prophets like Peter Wagner knew of Todd Bentley’s adulteress affair and controversial past and decided to endorse him against their better judgment. Not long after Wagner prophesied over Bentley, Bentley was internationally exposed of having an adulterous affair and also confessed to having drinking problems. The false prophets, teachers and apostles at Lakeland (specifically Rick Joyner and Bill Johnson), went into damage control in an attempt to recover their image.

This is just one of many instances where Wagner has exposed himself as a false apostle, false teacher and false prophet. Once again, Pringle shows he has no discernment or any biblical understanding on the holiness of God. Why does Pringle choose to associate himself with men who do more harm in Christ’s church than good?