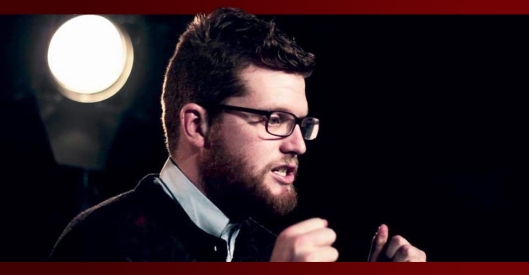 Alex Farncomb – trying not to be a fish out of water.

In the introduction to his program “Fighting For The Faith”, Chris Rosebrough took some time outlining his thoughts about Alex Farncomb’s sermon “I’m Happy Without Jesus” in the lead-up to reviewing the segment.

“We’re going to be listening to a sermon from a young guy there at c3 Church, from their Summer Series…I’ll describe what it is we’re going to be listening to here. This is a gentleman who clearly is, let’s put it this way, he’s reading. He’s reading theology, he’s wrestling with theology and I am convinced that this young man is very close to having a crisis of conscience. And the reason why is because true, good, solid biblical doctrine and theology is not going to do him well at C3 Church and ultimately he’s heading towards a collision. A collision, and the collision is going to be between what he’s seeing in God’s Word, what he’s wrestling with, and what’s happening there at C3 Church with men like Phil Pringle.

And so we’re going to listen to his sermon and we’re going to spend some time working with it and kind of showing what’s missing, because with his sermon , there’s some things that are ok, and then there’s some stuff that’s like ‘hmmm’. And then there’s some stuff that makes you go, ok, he’s reading, he’s got something, he’s got a bee in his bonnet….he’s theologically working with stuff and he’s actually wresting with it and so we’re going to provide, if you would, a friendly sermon review and I mean this. He’s not way, way far out there on the lunatic fringe. No, this is a guy, who theologically sounds like he’s becoming a fish out of water.

This is an interesting sermon. The reason why I say that, Alex is a smart guy, he’s been reading, he’s been studying and he doesn’t quite understand it yet, that his study of God’s Word, in trying to get it, understand it in depth is going to cause a major collision with what is actually happening and being taught at C3 Church and this should be an interesting sermon because clearly the guy is wrestling, but at the same time he’s also a bundle of really bad theology and doctrines.”

Listen to the sermon review here: