We have already covered that Phil Pringle neglected to inform Christians around the world about Kong Hee’s investigations:

We now wish to inform you of a group called Pathfinders.

Pathfinders says about itself:

“Pathfinders is the marketplace ministry arm of C3 Church. Equipping our people to thrive in the marketplace is one of the core strands of the C3 Church DNA. This includes people in business, professions, government, education, the arts, sports and entertainment.

Our objectives in Pathfinders are that all of our marketplace people:

1. prosper in their career or business,
2. bring light and life to their work and business environment,
3. bring Godly wisdom and influence to change their corner of the world for God” – http://www.pathfinders.org.au/#/about-us, (Accessed 28/08/2012.)

In C3 Presence Conference this year, it is important to know that C3 targets the rich in their church and financially manipulates them to financially invest in the C3 movement. Strong words? Then you need to watch how cunning Pringle is when he chooses to target people to give money for the building fund here. This link will play this video. (Transcript below.)

Terrence [To audience]: “… But one thing we [C3] are about, (and which I’m sure you know), we’re all about the market place. Now there’s certain people in the House of God which fund the House of God because they do so well and they’re so successful in business that they have the mulah to be able to fund the Kingdom. And one of those kings we have right here is Mr Andrew Tyndale. Come and join us Andrew! How are you today?”

Emma: “We love you Andrew.”

Tyndale: “I’m sure I’m here under false pretences but that’s all right.”

Terrence: “There’s no false pretences here at all. Now Andrew, you look after and head up Pathfinders. Can you tell us a little bit about what Pathfinders is, for those who may not know.”

Tyndale: “Sure! Well Pathfinders is one of the three DNA strands that we have. So we have community partnerships- sorry. Kingdom partnerships, community heroes and the marketplace. So Pathfinders is our marketplace ministry. So that serves people in business skills. It serves them with ah, success skills and empowerment for their job, their career, their- and to make a difference in their world.”

Terrence: “Ooo we like that. So it’s building people up so they can go and make a difference in the community and also in church in their business. Yeah?

Terrence: “Ooh! We like that! So we just had a Pathfinders Conference ah- well you can say meeting just before. Can you tell those who are watching, maybe they’re watching from overseas, and would like to implement a sort of business meeting in their church; how can they get involved with a Pathfinders? Or kick off something like Pathfinders?”

Tyndale: “Well we would encourage everybody in the C3 movement to have a Pathfinders group; a Pathfinders program. And Pastor Phil in fact laid out a program where each pastor who doesn’t yet have a Pathfinders could- should start a business connect group. Start a connect group of business people and really speak into their worlds. Just as a start. And let that kick it off and roll. We have a whole series of programs we’d be very pleased to share. So anybody who’s actually out there in the world watching this, we’d be delighted to share with other churches and really roll the programs out throughout the network.” . . .

Terrence: “Fantastic. Now. I want to inspire people. Cos we normally don’t talk- I mean when we have our business- ah sorry- our building fund, we sort of talk about the numbers that people give to the church. Can you talk about some of the people that come to Pathfinders and how much they contribute to the house of God. Just to inspire people what’s possible?”

Tyndale: “I would but I’d have to kill you.”

Tyndale: “Look. It’s clear that the largest givers in any building program are the business people, in most cases. And they’re the people who both- both give to begin with and grow in their giving as their career prospers as a result of the giving. So it becomes a self-fulfilling prophecy. A self-sustaining cycle so that ah- it ultimately- then you get leaders who are drawing other peoples- ah examples for other people to draw them through. And the cycle continues. But ah- for those who are running building programs, you’re business people are the core and the key to it.”

So what’s this got to do with Kong Hee?

Here is a photo of Kong Hee with guest speaker Marcos Witt in Presence Conference 2011. It seems innocent enough. 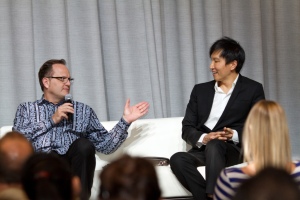 Until the photographer takes another photo further back. This time Phil Pringle is with the other two.

What was talked about? We don’t know. Going on what Tyndale stated above, there is a good chance Kong Hee would have talked about peoples “success skills and empowerment for their job, their career… and to make a difference in their world.” If this is true then readers need to be concerned that C3 is targeting “people in business, professions, government.” Especially since The Hon. Andrew Stoner MP (Minister for Trade and Investment), is involved with C3 and their Presence Conferences.

Pringle’s behaviour from the beginning of Kong Hee’s investigations to now raises some hairy questions.

Is it possible that people in the Australian government were not aware that Pringle invited a man that was under investigation by Singaporeon authorities for the possible mishandling of about fifty million dollars?

Leonard Lim from the Straits Times reported the court hearing on Wednesday, the 27th of June:

“City Harvest Church’s Kong Hee and four others were charged on Wednesday with allegedly siphoning church money, amid fresh revelations that they conspired to cheat the church of over $50 million.

It emerged on Wednesday that $26.6 million was allegedly used to cover up an initial $24 million which they had taken from the church’s building fund and put into sham investments.

On Wednesday, court documents showed that this alleged conspiracy was carried out through bond investments in two companies…

The prosecution revealed on Wednesday – to a courtroom packed with nearly 200 City Harvest members and supporters – that a second series of transactions was allegedly devised to misappropriate a further $26.6 million.

The prosecution said: ‘These further monies were circulated… to create the false appearance that the purported sham bond investments had been redeemed, when in fact the ‘redemption’ had been financed using these further monies misappropriated from church funds.’

This ’round-tripping’ meant that more of City Harvest’s building fund cash was used to repay the sums owed to itself.

The $26.6 million cover-up bid came about after the church’s auditor had raised questions about the purported bond investments…

Chew and Tan Ye Peng each face 10 charges – six for criminal breach of trust and four for falsifying accounts.

Sharon Tan was charged with four counts of falsifying accounts and three for committing criminal breach of trust as an agent.

The first offence draws a maximum of 10 years’ jail, and or a fine. The second, which Kong’s charges come under, is punishable with a life sentence, or jail of up to 20 years and a fine…

The total sum of $50.6 million that the five conspired to cheat the church of makes the City Harvest case the biggest financial scandal involving a registered charity. It eclipses the $12 million that the National Kidney Foundation sued Mr T. T. Durai and three others for, and the $50,000 unauthorised loan Ren Ci hospital’s Ming Yi was jailed for.” – Leonard Lim, The Straits Times, http://www.straitstimes.com/The-Big-Story/The-Big-Story-1/Story/STIStory_815914.html, City Harvest case: Allegedly total of $50m misused, Published on Jun 28, 2012. (Accessed: 28/06/2012.)

Is Hee To Be Free?

Is The Presence Conference Inviting Dishonest Men To Take Advantage of People?

The Pirate, The Presence & The Peddlers

The Singapore Government, Ministry of Home Affairs have made the following statements online:

Police has earlier sent a press statement on CAD investigations into persons for criminal breach of trust and false accounting.  Below are Deputy Prime Minister and Minister for Home Affair’s comments on the case:

Furthermore, the Singapore Government released a ‘Press statement by Commissioner of Charities’:

Press statement by Commissioner of Charities – (From: http://app1.mcys.gov.sg/PressRoom/InquiryfoundmisconductandmismanagementinCHC.aspx)

A STATEMENT FROM CITY HARVEST CHURCH

There is no case that is being brought against the Church.

The Church Management Board continues to provide guidance on the running of the church.

Church operations and cell group meetings will continue as usual, including all weekend services at Singapore Expo and Jurong West.

In the meantime, do keep the church, our pastors, leaders and their families in prayer.

It’s worth noting that that City Harvest Church’s statement is misleading. It is not true that, “Pastor Kong Hee, Pastor Tan Ye Peng, John Lam, Chew Eng Han and Sharon Tan were informed to attend court tomorrow” that morning. They were ARRESTED that morning. That’s quite a convenient thing they left out of their statement, don’t you think?

This statement can also be found on City Harvest Church’s Facebook wall.

More Insight To The Financial Misconduct of City Harvest Church

Is Hee To Be Free?

Is The Presence Conference Inviting Dishonest Men To Take Advantage of People?

The Pirate, The Presence & The Peddlers