EITHER DEFEND A WOLF OR GET OFF THE C3 CHURCH BOAT?

Dean Sweetman (overseer of the C3 Church Americas), has dodged the vast majority of questions put to him on this web site. However, the big question that remains unanswered is how Dean could have possibly allowed Nick Dimitris to remain in his C3 Pastoral position for so long, all the while turning a blind eye to what was apparent to so many others, remaining deaf to the entreaties of Nick’s victims (and marginalising the victims of the felon he was so keen on defending), and ignoring the advice of those who have shown far better judgement than himself.

When C3 Pastor Nick Dimitris was found guilty and was awaiting sentencing, we recalled a churchwatcher quoting Dean for upbraiding those in C3 Asheville with the ultimatum,

“your either with us and Nick or get off the boat”.” [Source]

Now Nick has now been sent up the river on “the boat” for a year and day. Wasn’t Dean Sweetman on the same boat as Nick Dimitris? Why isn’t the C3 leadership with Nick? When did they conveniently get off?

It’s a tragedy that Dean’s precious pastoral protege is being packed off to prison.

Does Dean think that maybe Nick didn’t tithe enough? Dean is surely aware that Phil has “prophesied” over Kong Hee, (serial plagiarist and confessed crossover deceiver), that “Not one day shall this fair head spend behind bars”. Couldn’t Dean have asked the one and only Phil Pringle, (that great globe-trotting apostle), to pray for Nick’s protection, and thereby have kept him out of the slammer?

This whole shabby affair further tarnishes the already none-too-stellar reputation of C3, and provides a stark object lesson of how prosperity cults in their lust for success and wealth, are quite willing to sacrifice the innocent in order to preserve the positions of the powerful and privileged New Age gnostics who run the show. 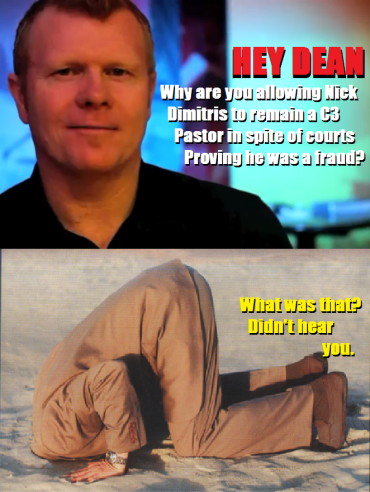 “Re Asheville, I will not be commenting until the court proceedings are over. Even when there is a full resolution you will not find me tearing people down publicly on an Internet blog.
If you know me you know that my intentions we [sic] good and I continue to believe for a strong healthy C3 Church in Asheville.” [Source]

“Still choosing to stay silent on Asheville Dean? Hoping it will go quietly into the night and vanish? Not willing to address it at all?” [Source]

“… All I can say at this stage is that we are awaiting the outcome of the trial and are hopeful things will be resolved favorably for all concerned.” [Source]

In other news, we were informed on Monday by the District Court that Nicholas Dimitris was scheduled to be sentenced Tuesday 11/26/13, in Asheville at the Federal Courthouse at 10:00 AM in Courtroom # 1 on the 3rd floor.

His Attorney was David G. Belser.  The Asst. US Attorneys assigned to prosecute Mr. Dimitris’ case were Don Gast and Michael E. Savage.

If for some reason David G. Belser, Don Gast and Michael E. Savage asked Dean to remove Nick Dimitris as a C3 Pastor before his sentence, would Dean say the same thing to them as he did to us? How can the C3 Church Movement afford to have Dean Sweetman as an overseer if his head is full of sand?

Phil Pringle must be absolutely livid at how all this has played out, and all the more so given that damning details of exactly what has transpired have become public knowledge thanks to the internet. Imagine what it would be like to have been a fly on the wall when Dean had occasion to discuss this matter with Phil Pringle. Perhaps Dean would be willing to share with us the gist of that particular conversation?