Four years ago, Kong Hee wrote an article titled “Wholesome Shallowness?“. In this article Kong Hee verbally bashed pastors who took issue with Sun Ho’s Music video, “China Wine”. He justified their behaviour by claiming that Sun Ho was not a pastor nor did she work for any religious organisation.

“In 2007, my wife Sun released a music video of the hit single, “China Wine,” . . . the video also raised quite a few eyebrows within the religious fraternity who felt it was inappropriate for a Christian to be featured in a dance video.

Although Sun is married to me, she herself was never formally ordained as a minister. She never felt gifted with a pulpit ministry. . . Yet, in spite of all her secular and creative achievements, many conservative pastors find it hard to accept Sun in any role outside of church ministry. But the reality is that she is no longer a church staff or a gospel singer. She doesn’t work for any religious organization.

As a professional artist, Sun has to take on many dramatic stage personas. This is what entertainers do. In the “China Wine” video, she happens to be acting in one such role. . . I think the struggle many pastors have is the difficulty to separate her association with me (as a pastor’ wife) and her career as a singer. I agree that if she is a “pastor” or “preacher,” perhaps the video would have been inappropriate. But Sun is not a pastor. She is an entertainer. All her music videos were not produced by the church but by her secular music label, the company that she is working for.”

The censorship and the deceit of Phil Pringle was staggering at Presence Conference. Phil Pringle simply presented that Kong Hee and CHC are being persecuted by the Singaporean authorities. To mislead thousands of Christians and pastors around the world without reporting the facts of Kong Hee’s charges and court case should cause a concern to Christians everywhere. The two-faced nature of this entire scandal is mindblowing.

If Christians at Presence Conference 2013 knew that Pastor Sun Ho performed her raunchy video China Wine, would they honestly be united in prayer over this issue? If they knew that Kong Hee was being charged for mishandling millions of dollars to finance her wife’s music career would they be opening up their hearts, minds and spirits to a very dodgy ministry?

Even local Singaporean news found it necessary to point out the fact that Sun Ho is no longer separating her lifestyle from her music activities. The Straits Time reported Sun Ho saying,

“I am very thankful to Jesus that I can resume my executive duties at such a crucial time for City Harvest Church”. 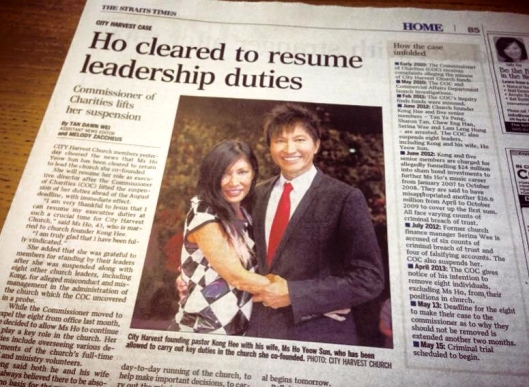